Hamburg, 19 April 2022 - The topic of sustainability remains important to small and medium-sized enterprises in Germany. Despite acute crises such as the ongoing Corona pandemic and the overshadowing war in Ukraine, it is even gaining momentum. This is shown by a survey conducted by Visable. The provider of Europe's leading online B2B platforms wlw (formerly "Wer liefert was") and EUROPAGES approached decision-makers from small and medium-sized German companies via the market research institute YouGov. More than 40 percent of the respondents stated that the importance of sustainability in their company had increased significantly (15 percent) or at least somewhat (26 percent) as a result of the current crises. A decrease in the importance of the topic of sustainability was reported by a total of only 7% of the respondents.

The survey took place on the occasion of the "LFCA Action Week". Visable supports the organisation "Leaders for Climate Action (LFCA)" in its goal to reach a total of 100 million people with information on climate protection during the action week from 18-24 April 2022. Visable CEO Peter F. Schmid puts the results in context: "The current crises pose enormous problems for companies in a wide range of fields: Massively rising energy costs and interrupted supply chains are two particularly challenging examples. Nevertheless, the topic of sustainability does not lose its importance as a result - quite the opposite: the crises in particular show companies that only sustainable and forward-looking management in all areas makes their businesses future-proof."

More companies implement environmental and climate initiatives
According to the survey, two thirds of all companies (66 percent) have implemented environmental and climate initiatives in the last twelve months. Something is happening here: in a comparable survey by Visable last year, only about half of the companies (52 percent) had indicated that they already made active contributions to environmental protection. In terms of measures, the digital office in particular is becoming more and more prevalent, certainly accelerated by the necessities of the Corona pandemic. 31 percent of the respondents state that their company has increasingly relied on home offices in the last twelve months. About the same number of companies have reduced business travel (29 per cent) and switched to online meetings (28 per cent). The switch to paperless processes also makes it into the top 5 measures implemented, with 29 per cent. 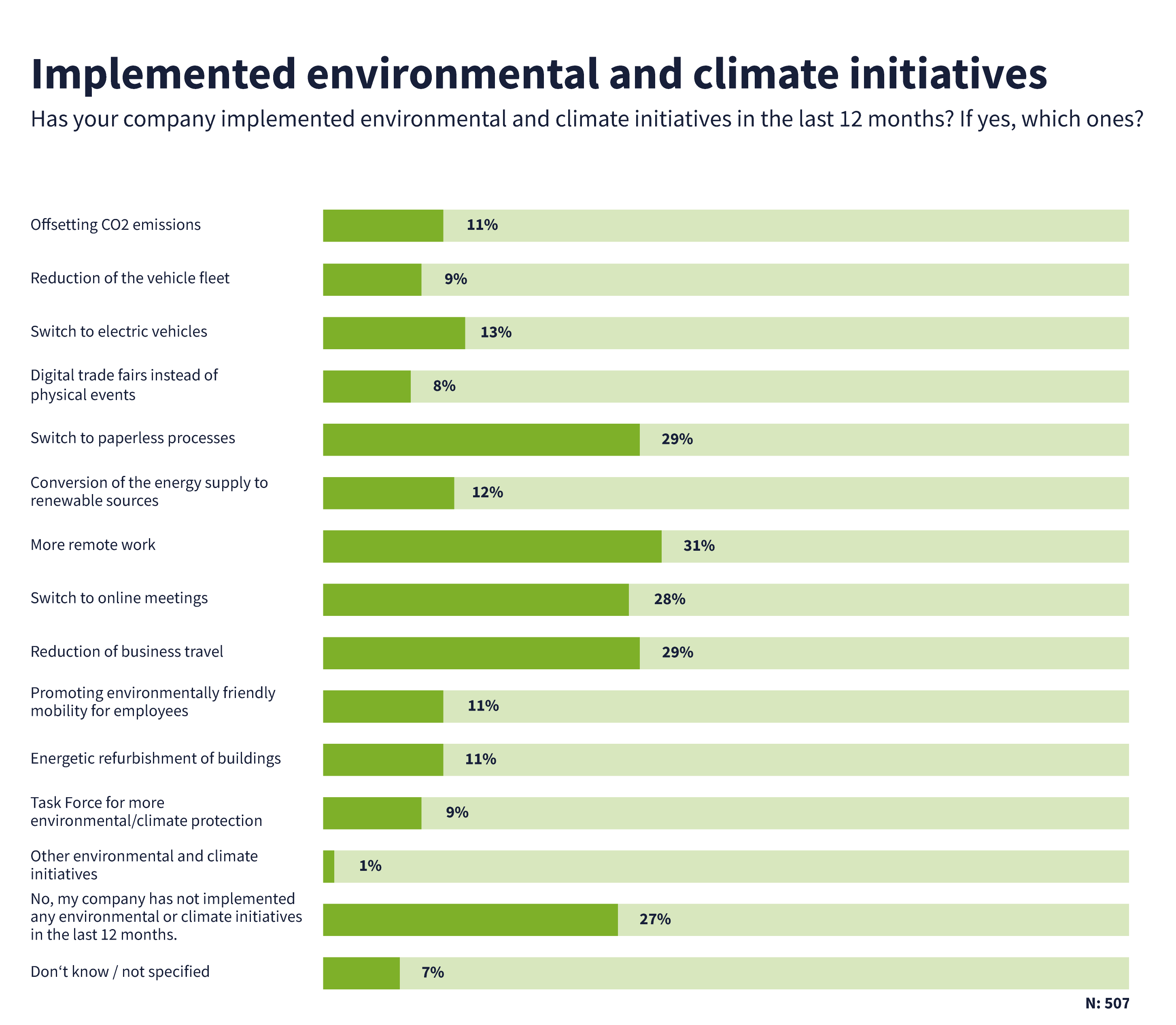 The pandemic is going, home office remains
With the expected waning of the pandemic, the momentum for implementing measures in the area of remote work also seems to be waning somewhat: For the next twelve months, a significantly lower proportion of respondents have planned corresponding measures. But despite the radically changed work situation that has already resulted from two years of the pandemic, 20 percent still want to expand home office work even further. Fifteen per cent each want to switch even more to online meetings and reduce business trips. One value remains constant in the analysis for the last and the next twelve months: 13 percent of the respondents want to convert their vehicle fleet to electric cars. This is roughly in line with the population average: according to a survey of 1,500 people in Germany by the consultancy Deloitte, 15 percent of consumers would consider an all-electric vehicle as their next car.

Similar trends in international comparison
The online survey was conducted on the YouGov platform from 5-10 April - in addition to Germany, where 508 employees with decision-making authority from small and medium-sized enterprises took part, also in Switzerland (217 participants), Austria (217 participants) and France (530 participants). The country comparison shows that the relevance of sustainable management is not only unbroken by the current crises, but is even (significantly) increasing in parts: This was said by 49 percent of the Austrian respondents and 46 percent of the Swiss survey participants. In France, the figure is still 36 percent. Peter F. Schmid comments: "I am pleased to see that the topic continues to gain importance in our core markets. In order to promote this development, it is important to me personally to raise awareness for more climate-friendly corporate action and, of course, to implement it in my own company. That's why I'm involved with Leaders for Climate Action and we support LFCA Action Week as a company."


For inquiries via email: